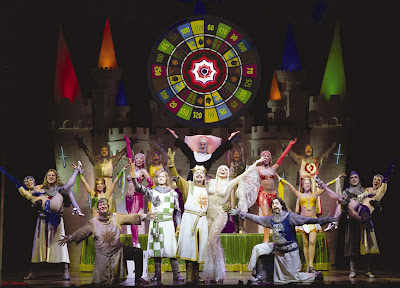 Billed as being "lovingly ripped off" from the 1975 film Monty Python and the Holy Grail, the award-winning Broadway musical Spamalot, which opened in Melbourne last night, is both a satire of Broadway musicals, and a homage to the iconic English comedy on which it's based.

The original film was created by the well-known troupe of Graham Chapman, John Cleese, Terry Gilliam, Eric Idle, Terry Jones and Michael Palin. It was a low-budget exercise in which the quest for the Holy Grail undertaken by King Arthur (Chapman, now deceased) and his knights was presented both seriously (period costumes and settings, complete with extremely mucky peasants and plague, instead of the clean and sanitised version of the past usually depicted in cinema at that point) and satirically (a historian strides about between scenes discussing Arthur's battles and their significance; the peasants are members of an anarcho-socialist collective).

Many of the film's best jokes and key scenes are translated wholesale into this musical production created by former Python member, Eric Idle; as are the main characters, including the cowardly Sir Robin (originally played by Idle) and his annoying band of minstrels; and the almost-psychopathic Sir Lancelot (a role created by Cleese).

Unfortunately, despite actors who generally do a worthy job in re-creating the originals' accents and characterisations, the show itself falls rather flat.

To begin with, Billie Brown as King Arthur cannot sing: in the first act last night, his voice was so flat as to be wince-inducing. Brown's poor vocals highlight one of the major flaws of this production: with all the performers miked for sound, overall both live band and actors/singers alike felt strangely thin, leached of power, impact and projection. Instead of feeling the music wash over me, it felt strangely distant and tinny; more like listening to a record rather than experiencing a live event.

And speaking of flat, the entire first half of Spamalot was just that. Performances didn't feel engaged or as switched-on to the degree that they required; which coupled with the afore-mentioned problem with the sound, really seemed to hamper the production. Maybe it was just first-night nerves, but there was a distinct lack of atmosphere and engagement among the audience by the time we filed out into the foyer at interval.

Over a glass of bubbly and beer, my friend Martin and I pondered some of the other flaws in the production so far.

Spamalot basically felt like a lame reproduction of Holy Grail with a few new lines and a handful of limply-rendered songs tacked on. The 'bring out your dead' sequence perfectly illustrates this flaw: when the cart-load of plague victims suddenly leapt to their feet and burst into song, it didn't feel clever or funny, just awkward and contrived; like Idle felt a song was required rather than actually necessary at this point in the show.

The first half did have one shining moment, it must be said: 'The Song That Goes Like This', a parody of musical romances generally and Andrew Lloyd-Webber's bombastic The Phantom of the Opera specifically; performed with gusto by leading lady Lucinda Shaw as the Lady of the Lake.

"Once in every show
There comes a song like this
It starts off soft and low
And ends up with a kiss
Oh where is the song
That goes like this?
Where is it? Where? Where?

A sentimental song
That casts a magic spell
They all will hum along
We'll overact like hell
For this is the song that goes like this
Yes it is! Yes it is!"

Another thing that struck me about the show - and which I was actually quite offended by - was Idle's preference for attractive, scantilly-clad female performers. Was it entirely necessary that they showed off so much flesh? Methinks a certain middle-aged ex-Python was living out some of his sexual fantasies with this aspect of the production... It also, to be blunt, felt like someone desperately wringing out the last vestiges of novelty from their faded creativity in order to make a buck.

Thankfully the second half picked up significantly, though not enough for me to ever really enjoy Spamalot. Performances lifted, thanks in part to a rendition of Always Look on the Bright Side of Life (from Life of Brian) and the show finally found its feet by virtue of moving away from overly-faithful homage into new territory (albeit territory that I suspect the film's original co-creator Terry Gilliam would have hated, as it was largely his argument for keeping the film set in period that quashed scenes some of the Pythons propsed, which would have seen King Arthur and his knights end up looking for the Grail in modern-day Harrods).

Instead of a quest for the Grail, Arthur and his knights are given a new goal: to stage a Broadway musical. Cue a borderline-offensive song about the neccessity of Jews in staging a successful Broadway show; a satire of The Boy From Oz complete with maracas and camp costumery (tied in with a newly-added gay subplot involving one of the film's major characters - but why said macho character has to be associated with such camp stereotypes just because he's finally admitted he likes cock is beyond me); some self-referential Australian jokes; and a hastily engineered climax.

When it was all over, complete with an encore that - judging by the expressions of some of the actors, and also Eric Idle, who'd joined them on stage - didnt get the rapturous response they'd expected - it was time to stroll off to the NGV for the well-catered after-party. Nice food, good drinks, but a word to whoever hired the DJ - he was fucking terrible. Talk about bland and safe - rather like Spamalot as a whole really, so at least he was appropriate to the overall tone of the production.

In summary, while the costumes were great, ditto the set design and the infrequent but effective intergration of multimedia into the show; this is not a show I would recommend to anyone except the most hardcore of Monty Python tragics. I mean, I adore Pythonesque humour, and I walked away from Spamalot far from satisfied.

Two occasional chuckles out of five.
Posted by richardwatts at 11:11 am

I had the unfortunate opportunity of seeing Spamalot in Las Vegas. I am a Month Python fan, I am not a Spamalat fan. Your review is right on target. Ernesto

I fully agree. I could have recommended this show as a light musical entertainment even oldies could enjoy until the Jew joke came along. It was in bad taste and had no relevance in Australia. We are long past the "wogs out of work" jokes. When the gay part came along, this show lost me. That was the nail in the coffin. Wouldn't recommend it to the grandma to see. Also I saw quite a few people with young kids. I guess they'll have a bit of explaining to do on the way home. 5/10 for me I'm afraid.

I have to disagree with all you. I saw the show recently in London, and I must say I greatly enjoyed it.
Bad taste? Maybe, But then I just have bad taste. Taste differ eh?

But the show had me laughing from minute one, and the only time I stopped was in the break. the humour may have been on the edge, but that might be one of the things I liked about it.

Sorry that you didn't enjoy it, but for me it was one of the best I went to in London!